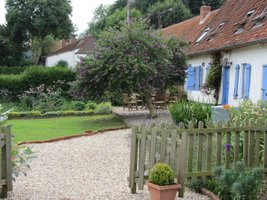 The property was built in the 1860's and underwent an extensive renovation in 2003 it retains many origional features such as oak beams and a large fireplace. The property is in good order, having recently had central heating installed, please go to the picture Gallery to see the property in more details, below is a summary of the property features :

Ground Floor: Dining area adjoining fitted kitchen area with fridge, microwave & cooker. There is a very comfortable spacious living room with log burner, TV, DVD, There is a modern bathroom with bath, WC sink and shower. There is a large double bedroom, and separate hallway leading to upstairs. Outside is a separate utility room with washer/dryer and additional fridge/freezer

First Floor: There is a very large bedroom room with two single beds, There is a separate master double bedroom with en-suite shower room with basin & WC.

Gardens: In the garden area there are patios's to the front and rear, several picnic tables and benches and a French BBQ.

Misc : On request there is a stair gate, a high chair and a cot available and also a fire guard, there are a number of games to play both inside an out including boules and Trivial pursuit, there are also a number of DVD's and video's to watch, the double room has a small TV. The outside garden now has a full enclosed area to restrict small children wondering, please note the property adjoins a large pond so small children should be supervised.

Hesdin : Was a fortified town with defenses erected in 1554 by Charles V and was under Spanish ownership until 1639 when Louis XIII retook it for France. This is the nearest town to Tortefontaine about 10 minutes drive. It was used for the filming of the television series ‘Maigret’. It has a large cobbled square with lots of shops and restaurants. There is a tourist information centre and a small museum. Banks, supermarkets, bakers, butchers etc...

Hesdin market takes place on Thursday morning when stalls cover the entire centre of town. Farmers bring their produce from miles around, so you can stock up with the freshest fruit and vegetables, goat’s milk, cheese and fish, there is also a livestock section and other goodies.

St Valery : Beautiful little fishing town where William the Conqueror set sail for England. Lovely walks along the quayside there are several nice restaurants or while away a few hours taking the steam train across the bay. It's a tourist location so you are not restricted to 12:00-14:00 for lunch.

St Riquier : situated close to Abbeville and about 45 minutes drive from Tortefontaine is this once strategic town with it's splendid Abbey which was built in the 12th Century is worth a visit.

Montreuil : Lovely fortified town, side streets to explore a bustling square interesting shops and some great cafe's and restaurants. This is the origins of the play Les Miserables, and every year there are open air evening performances at the Begining of August.

Le Touquet: Some 35 miles from Tortefontaine is this very smart up market coastal town 'Paris Plage' with many chic shops large hotels

and nice restaurants. a very popular day out for both the French and English especially on Sundays, ( I'ts probaly the only place for miles around that is open on a Sunday so it's popular). Good for golf, cycling, swimming, shopping and walking.

Arras: It is possible to take a lift to the top of the Belfry to contemplate a town that is over 2,000 years old. It has two beautiful main squares with many nice restaurants, Just outside the town centre near the train station is a new exhibition where you can tour the many underground tunnels which was quarried as early as the 11th Century and used by British troops from 1914 to 1918 as a vantage place to attack the Germans.

Abbey of Valloires : Just across the river Authie, some 5 miles south west of Tortefontaine, near the charming village of Argoules. The bodies of many of the French nobles slain by the English at the Battle of Crecy were buried here in the original 12th century Cistercian foundation. The present building, dating from 1741, there are guided visits in season and the surrounding gardens are beautiful. www.jardinsvalloires.com

First World War Memorials : In 1916 the Battle of the Somme was one of the most important and the most devastating. Many scars of the conflict still remain : trenches, mine holes, there are also numerous cemeteries and memorials of the Commonwealth nations. The pretty town of Albert with it's WW1 Museum and the memorial at Theipval are well worth visiting

Azincourt : Azincourt is where in 1415 Henry V of England defeated an army three times the size of his own. The Azincourt Battle Visitor Centre has many interesting exhibits some of which are interactive, the building which house the centre is representative of a long bow.

Crecy: On 26th August 1346 the French Knights pursuing the English Army suffered a punishing defeat at the hands of Edward III's archers. You can look out to the battlefield from the viewing tower that gives the same vantage point as Edward the III as he commanded his troops. Crecy also boasts 11,000 acres of forest which is mainly Beech and Oak. The forrest is accessed by numerous footpaths and bridleways some 3 miles from Tortefontaine.

Albert: The town of Albert is a 40 minute drive from Tortefontaine and has a war museum with realistic trench atmosphere, there are also some nice cafe's that you can rest a while in. Albert is very convenient for visiting the number of local war memorials including Theipval. Don't forget to visit Tommy's cafe which is on the main road before you turn off for Theipval, the garden has an unexpected set of treasures.

We have many brochures, of great places to visit. If you wish to find your ancestors that died in the first world war, Tortefontaine is a great base to choose.

Golf : Several courses are available with those around Hartdelot-Plage offering a challenge to all discerning players. (30 miles)

Nampont-St-Martin Golf Course. Though the best-known courses are at Le Touquet and Hardelot, there are other excellent options. South of Montreuil, is a beautiful 27-hole course set in the lovely grounds surrounding a moated 15th-century manor house. The unusually good restaurant-bar which welcomes non-golfers, is a great place for an alfresco snack. (10 miles)

Cycling : This area is very popular for cycling especially through the Crecy forrest and towards St Valerie where the terrain is extremely flat. There are a number of local cycling routes you can choose from. You can also hire Bikes outside St Valery for cycling along the flat flood plane.

Fishing: This area is very popular with the French for fishing holidays, the Cancher river nearby has many places to fish freshwater Salmon and Trout, there are also a number of large ponds in the valley stocked for fishing. You can purchase day permits (8 euro) from Mrs Couchon the bakers wife in the neighbouring village of Douriez, the bread is exceptional, he's not one of the greatest pastry cook though.

Restaurants :They are all good. Le Estaminet de lAndouiller is the nearest just a mile away in the village of Douriez it offers a rustic menu, the proprietor is famed for his Andouiller, this is a lovely friendly restaurant.

A little further away is the Gros Tilleur in the village of Argoules and they serves fantastic set meals.

There are many good restaurants in nearby Hesdin, the visitor book at the house has visitor feedback for many of the local restaurants.

Beaches : Berck Plage is only 20 miles away with many seaside resorts stretching both North and South representing some of the best beaches in Europe with sand yachting and wind-surfing as popular pastimes. In addition the beach in Le Touquet is extremely nice.

Shopping :- Please note that you need to organise your time if you want to do shopping, the local French shops tend to close from midday to 2PM. However the Lidl's and Carrefeur in Hesdin do open at lunchtimes along with the Delicatessants and Cafe's.

Banks - The nearest bank is in Hesdin, you can withdraw from the many cashpoints in the town, please not that some cashpoints only take French cards so you may need to try others. Credit Agricole is fine with UK cards.

Supermarkets - The Carrefour in Hesdin is the nearest large supermarket, it stays open during lunch hours so it's probably the best time to shop, does not open on Sundays except in the summer holidays when its open until 13:30. For supermarket shopping on Sunday, intermarche in Hesdin (Turn left at the mini roundabout past Carrefour and carry on to the next roundabout)

Shops General - In Hesdin most shops are closed on Monday (why not) as well as Sundays, to do some posh shopping go to Le Touquet, It caters for tourist hours. The Carrefour in Crecy opens Sundays 10:00 to 13:30 and there are 2 bakers there one of which will normally be open Sunday mornings.

Bread - You can't beat the baker in th the neighbouring village of Douriez.The baker delivers bread outside your door most days of the week around 11AM ( Toot of the horn white van and queue) and opens 6 days per week (some Sunday mornings in the summer). There is a new bakery/Cafe in Hesdin on your left as you turn right at the carrefour roundabout, this opens till late on Sundays

Croissants/ Pain Chocolat's - Get these from Hesdin or Crecy there are a number of places to get nice cakes.

Wine - The Supermarkets are the best place to get wines. We use Lidl in Hesdin, yo can get very reasonable wine and beer there, the wine is some £3 per bottle chepaer than you find in the UK. We also use Majestic wines in Coquilles, its the first junction off the A16 from the tunnel, it opens at 10AM Saturday and closes at 6PM

Petrol/Diesel - Diesel is now about the same price in France is it is in the UK. Petrol is more expensive in France, Please note that automatic service stations mostly now accept UK credit cards, but some do not, Carrefour seem to work for most types of card.